IRI and Nielsen numbers for the week ending March 14-15 indicate fresh produce sales continue to soar as cities and states imposed more restrictions to contain the spread of the new coronavirus COVID-19.

Data for the previous week also showed significant growth for fresh, and the upward trend has only accelerated.

IRI reports that total produce sales jumped by 34% for the week ending March 15, compared with the same week in 2019, with vegetable sales increasing 41% and fruit sales growing 27%. 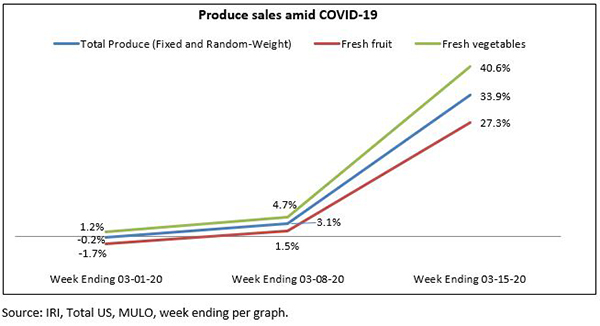 “We’re seeing big gains for nearly all fresh fruits and vegetables, with incredible acceleration for items such as potatoes, yams, oranges and mandarins,” Jonna Parker, team lead for fresh for IRI, said in a news release. “Additionally, shoppers’ stock-up mindset is driving a huge surge in demand for frozen and shelf-stable fruits and vegetables that have longer shelf-life.”

The fresh produce items that saw the biggest dollar increases for the week, per IRI, were the following:

“While stocking fridges and freezers are a big part of the sales surge, home cooking and snacking became much more prevalent as well,” Anne-Marie Roerink, principal of 210 Analytics, said in the release. “The week of March 15 saw more school and office closures, increased working from home and some cities/states started mandating restaurant seating to be closed. Sales surges in apples, berries, oranges, etc., are without a doubt related to the desire to eat healthful snacks to build the immune system. 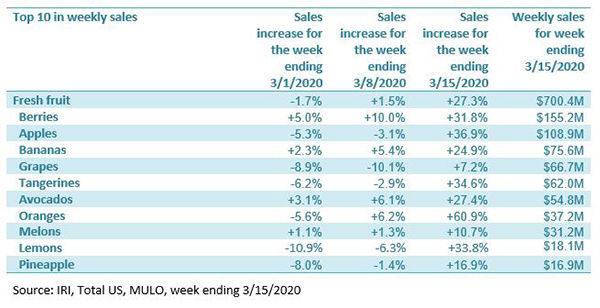 Roerink noted that the numbers show the first couple of weeks of sales growth related to the coronavirus crisis went mainly to paper goods, disinfectant, hand sanitizer and other such items, while the week ending March 15 was all about “edibles,” the term IRI uses for food.

Nielsen found that produce department sales for the week ending March 14 jumped 23.2%, compared to 3.8% growth the previous week. Fruit sales were up 18.8%, and vegetable sales jumped 27.3%.

“It is no surprise, based on anecdotal reports, that the inflection in sales gains between the weeks ending March 7th and 14th was so dramatic,” Steve Lutz, senior vice president of insights and innovation for Category Partners, said in a news release. “As we look across individual categories in fresh produce as well as departments outside produce, the patterns are beginning to emerge.

“Highly perishable items are selling but experiencing smaller increases in sales,” Lutz said. “In general, the more an item or category is considered storable and a staple, the greater the increases in year-over-year growth triggered by the COVID-19 crisis. Consumers are still picking up highly perishable items for the next week, but they are stocking up on more ‘durable’ food items for a longer time horizon.”

Jeff Cady, director of produce and floral for Williamsville, N.Y.-based Tops Friendly Markets, agreed with other retailers that demand right now is higher than it has ever been.

“By far, this is the craziest and busiest time I have ever experienced in my career,” Cady said March 20. “I will say that while the stress levels are off the charts, growers/packers/shippers are doing a fantastic job under these unprecedented circumstances. Store associates are getting an incredibly difficult job done every day. This industry was incredibly strong before this crisis, but it will be even stronger when we emerge on the other side.

“I am proud to be part of this industry and embrace each day’s challenges with one goal: keep food on the shelves as best as we can in the communities in which we serve,” Cady said.

Farm Journal, the parent company of Produce Retailer and The Packer, is…

A new survey by Category Partners indicates shoppers have been adjusting…

With the weeks-long crush of panic buying fading, grocery retailers are…